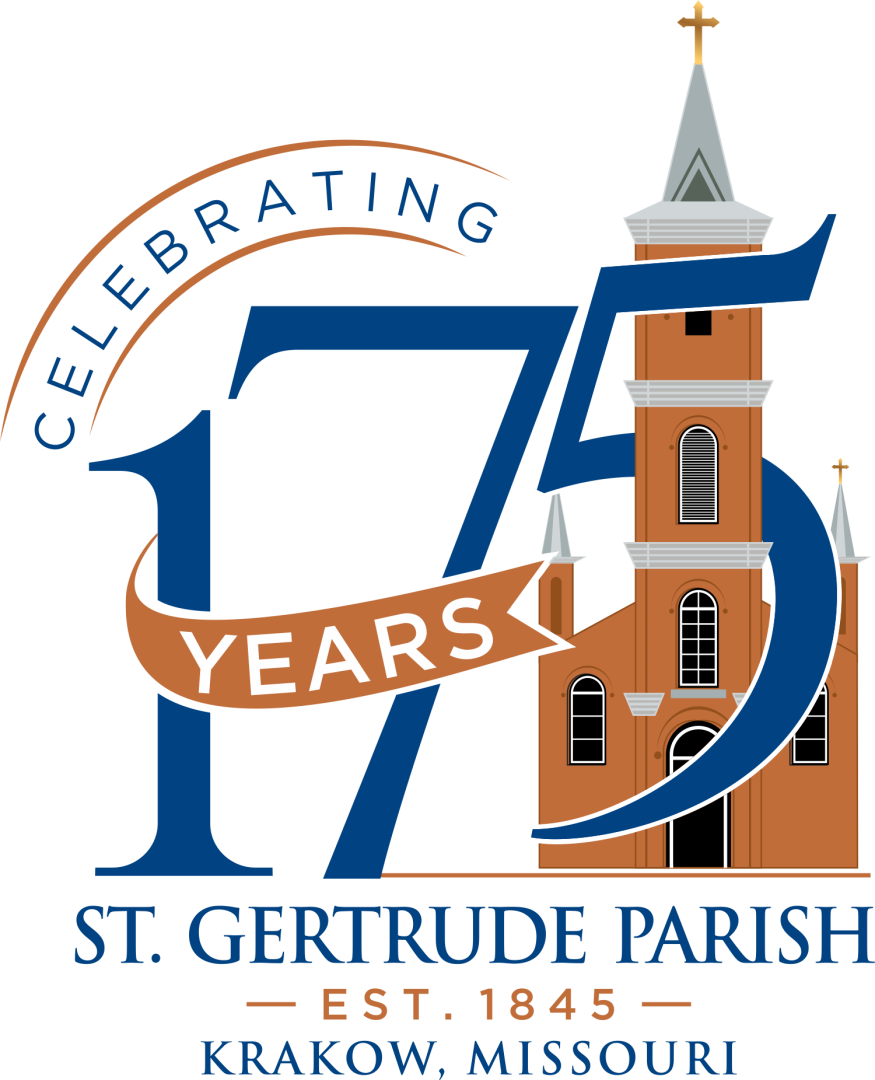 Franklin County in the State of Missouri was settled during the 1830’s and 1840’s. The need for the establishment of Catholic Church parishes in the county was widely recognized. The first of these would be St. Francis Borgia Parish, in Washington. In August 1845, a second Catholic Parish was founded south of Washington. This would be St. Gertrude Parish, located in Krakow, Missouri.

Two parishioners purchased the 40 acres of land on which the parish is now located in 1846. The parcel of land on which the present St. Gertrude Church is located was added to this property later. November 23, 1856 saw the dedication of the original section of the Church. This structure was expanded in 1864, toward the east with the addition of a sacristy and two small rooms for the visiting priest to stay in when he came for Mass, and to the west with the addition of a bell tower and a church basement. On November 21, 1869, the Church was formally dedicated, and the basic structure of the Church has remained the same to present time.

Originally, St. Gertrude Parish would include what is now the parish of St. Ann, Clover Bottom. Beginning in the 1870’s, land was offered for the establishment of a Catholic Church and/or School at Clover Bottom for the Polish immigrants. In 1899, St. Ann was established as a separate parish.

In 1880 or 1881, the rectory was built at St. Gertrude. This is the present rectory, but only the first floor. The second story would be added around 1909. In 1882 the School Sisters of Notre Dame arrived at St. Gertrude. Within a few years a combination school/convent building was erected. This would be completed in August 1888.

St. Gertrude was served first by the members of the Society of Jesus (Jesuits). The Jesuits departed from St. Gertrude in 1894. The Franciscans would take over. The St. Louis diocesan clergy came to St. Gertrude beginning January 1, 1901.

In 1941 a thorough renovation of the Church began. On October 24, 1945, St. Gertrude celebrated the 100th anniversary of its establishment as a parish. In 1959, the first section of the present school was built, consisting of four classrooms and the large cafeteria (now used as the school library). Subsequent additions would be added over the years, with the final addition completed in the summer of 2003. A new convent was built for the sisters in 1960. The old school and convent were demolished.

In 1958, Our Lady of Lourdes Parish was established in Washington. At that time, the present boundaries of St. Gertrude Parish were established.

In January 1982, Deacon Charles Moll would become the first member of St. Gertrude Parish to serve in the ministry of a Deacon. Sadly Deacon Moll would die in a tractor accident in September 1988.

In 1992, the School Sisters of Notre Dame ended their 110-year affiliation with St. Gertrude Parish. From that time onward, a lay faculty would staff the school.

Pastors over the years would continue to lead the parish through various improvements to the buildings and grounds. The St. Gertrude Parish Center was completed in 1995. This would be completed in time for the parish’s 150th anniversary celebration. Many building and grounds improvements were accomplished at St. Gertrude during the eleven-year pastorate of Fr. Dennis Zacheis.

In 1998, Deacon Charlie Gildehaus was ordained to the ministry of Deacon. He continues to serve St. Gertrude parish through this ministry to this present time.

St. Gertrude Parish provides a Catholic presence in the Krakow community. The parish marked its 160th year in 2005. The parish marked the 150th anniversary of the Dedication of our church building in 2006. In 2008, a major renovation on the church building included tuck-pointing and the installation of a new top to the Church steeple. This is a splendid crown to our church, and with it lighted, it is a landmark for the surrounding community.